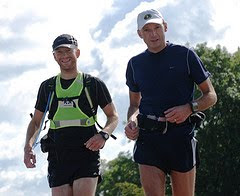 Back again. As I write this I am thankfully recovered and in the middle of a heavy training week.
The thing I am grateful to have recovered from is the JOGLE training weekend which was designed to let us test out the distance by doing two of the days of the planned schedule of the actual event (days 11 and 12). It was also good to meet a few of the other guys who are doing it, and the organiser Rory.

Originally I thought that this may not be the most sensible of ideas as it lay one week after the Classic Cliffs race which took a lot longer than anticipated. Recovery was going to have to be fast and efficient for me to be able to drag myself around the two days of 57 miles!

The first day was to begin at 5am which is fine by me, but to get to the start at Wigmore up on the Welsh border, I needed to be at Severn Bridge services at 3am to catch a lift with Rory. Fortunately a good work mate of mine, Joe, offered to pick me up at home at 1:30am. There was no way I was going to sleep at this stage, so I’d managed to lose another entire nights sleep. I’d definitely need some seriously early nights after this to try and catch up!

Joe drove me to the services where I found Rorys vehicle and then had to wake him up as he was fast asleep and I needed to get in as it was raining which wasn’t the greatest of starts!

After waiting around for a few others to turn up for a lift, we sped off North down some very dark, very quiet road. The first day was to finish back at the services we had just left, so I was interested to watch the roads we travelled as they stretched on and on and on…
The roads were soaked in places, and it’s at these times that you start questioning what on earth you’re doing, before pushing that sense out of your range of thought. There wasn’t too much talk as everyone was rather tired and if they were anything like me, a little nervous.

After about 1 hour and 40 mins we arrived at the tiny little sleepy town of Wigmore. Rory found somewhere to park that would hopefully not disturb anyone, and we all crawled out and stretched and started prepping for the days graft. There were six of us in total. Mark Cockbain was not doing the Sunday, so just the Five as long as everyone gets through today ok of course!

We waited till 5 then we began. It was quite nice not being a race so that there was less pressure, and we all instantly began chatting away, getting to know each other. The road was amazingly quiet for at least the first hour, so going two or three abreast was no problem. All very social and very interesting finding out just how experienced everyone was and what they all did in life.

As we plodded on, I felt alright but could feel that my legs where still quite heavy from the previous weeks endeavours. I tried not to think about the next morning and just how stiff I’d be as I crawled out of bed. There were to be check points every 10 miles which is all I’d allow myself to look forward. The first cp came soon enough. I topped up my water in my bladder, ate half a 9bar then carried on. Today was going to be tough especially as it was all going to be on tarmac. My knees felt a little weak from the pounding I gave them the week before on the crazy downhills, so I was expecting to have not too happy knees by the end of the weekend.

It was also raining on and off all the time which was nice and refreshing in the short term but when you’re out in it all day things begin to rub. Not nice, especially when you have to do it all again the next day! We eventually got to cp2 where I rammed as much food and drink down my neck as possible. Topped up my bladder then set off again. It was around this time that I suspected that I had a leak in my drinks bladder as my short were sticky from the energy drink. Not good, but it only seemed like a very slow leak, so I kept topping it up hoping it would last the weekend.

As we got to the location for the third cp we discovered that one of the guys had had to pull out due to an injury. We trudged on. By this stage the roads were getting bigger and busier. Most people would give us space but occasionally you’d get some lunatic not pull out at all as they sped past at some ridiculous speed! Very dangerous at times but I was totally expecting this so I had no problems. My hip flexors were feeling really strained by now, my one toe that always seems to get a battering was feeling a little battered and my achilles was playing up as usual. Don’t think of tomorrow…

We were still chatting quite a bit which definitely helped with time and to help take your mind off of the niggles that we all seemed to be struggling with. When we got to cp4, Colin looked pretty pale. He said that he’d struggled to get any solids down and that he’d ran out of fluid earlier. We all topped up then disappeared up the road. Each step feeling a little more difficult than the last. We soon left Colin to do his thing. Hopefully he’d fill up his tanks and get a second wind.

Finally we got to cp5. We were all really starting to think of a nice bath and bed. Eventually, we could see the Severn Bridge. We were going to finish at the services which were at the other end of the bridge. I was feeling very tired now and was beginning to think of the next day. As we reached the far end of the bridge, Rory was there to take some pictures as we approached. We’d done it! 12 hours and 26 mins! As Mark was just doing the one day, He didn’t need his hotel room which he’d booked far in advance, so he very generously offered me his room for the night. Nice one Mark. I got the keys and let my self into my room. It was dull and normally quite horrible, but tonight it was absolute luxury! I took my soaked clothes off and climbed into a hot bath. I was very stiff, but this felt really good. I never normally bath but standing up seemed like far to much hard work!

I then wandered down to the Burger King and got myself a double whopper meal. A total novelty for me, but the only other option was a pub a 15 min walk away. The walk and the probable wait was too much. I needed instant gratification. I sat in my room and wolfed down the meal. Pretty horrible, but seemed to fill a gaping hole. I then prepped my kit for the next morning, set my alarm for 4:30 and crawled into bed for hopefully a good nights sleep.

I thankfully slept like a log! I painfully dragged myself out of bed to have my muesli, then put on my wet smelly trainers. I had a black toe nail due to not cutting my nails short enough. Silly mistake! I brushed my teeth then, made my way outside to meet the other guys who were waiting for me. All except Bathany, who decided to just start straight away, about 10 mins before us. I say us, it was just Colin, David who looked strong, and myself. We made our way off into the dawn. The weather looked great. Maybe a hot day today! As we made our way down the road I realised that my back and waist was raw from my leaky bladder. Could be a pain throughout the day.

Todays route was from the severn bridge services all the way down the A38 to Taunton train station. These were roads that I’d travelled many times before when I used to do a bit of cycling. It would be nice to know the roads fairly intimately. When certain features are coming etc. Plus the fact that we had to make our way through Bristol which would be easy for me seeing as it’s my home town. In fact, we were going to pass within a 1/4 mile of my home. Hmm, tempting!

After the first cp, David and I seemed to be running the same pace, so we stayed together. I said to him that when I got over the Mendips I was going to start a run 25 mins walk 5 mins strategy which he said he would try with me. I found this was good during the GUCR as it gives you 5 mins to drink, eat and make adjustments etc every 30 mins. Seemed to work then.

We reached the next cp just outside Bristol. It was now very hot. I was drinking lots of water, still storing it in my leaky bladder. I ate loads of malt loaf, then we wobbled off. We made our ways over the undulating next 10 miles till we got down the final real hill onto flats. Then cp3. Rory was taking loads of pictures of us here. It’s funny when you see these pictures as I don’t look in too badder state. I was feeling pretty knackerd by this stage though. Still a long long way left too!

As we left again, we started our run / walk strategy, which seemed to go down a treat. It’s good as it breaks it up, and it forces you too look after yourself which s something that is easy to neglect when you’re this tired. The next cp we were informed that Colin was having another tough day, not managing to keep much down, and some tendonitis on his shin. My same problem was giving me grief. Something I will need to sort out before the actual event. David and I were managing to keep an ok pace but were starting to flag a little.

Finally we reached the last cp. Eight miles left. So little yet so far! We ran a little faster than normal as we could sense the end. When we reached Taunton we took a wrong turn and had to add on a little extra mileage. Not the best time to do it! Then we eventually came into the station and found Rory stood next to his vehicle. Bliss, we’d made it! Thank god. That was the second and third longest runs I’d ever done, but I’d done them on successive days! I was really chuffed with this performance. Especially a week after the classic cliff race.

The actual race will not be two days, but the seriously testing 15 days! It’s going to be very tough indeed. As long as I can hold off the injuries. Very scary stuff indeed.

So, as I said earlier, I’m currently in the middle of a heavy weeks training, then I’ll take a week off, then it’s the Ridgeway which is 86 miles. I’m really looking forward to this one. More running though the night.