I was a bit slow dipping my feet into the GPS pool. I’d never really been bothered about my pace and to this day, if someone asks what sort of pace I’m running or plan to run I have no answer. I haven’t got a clue. I started off with heart rate monitors as I saw this as being far more important for performance and training, so when I was a cyclist I had a couple of Polar HRM’s. Then when I got into running six years ago, I wanted to know my distance 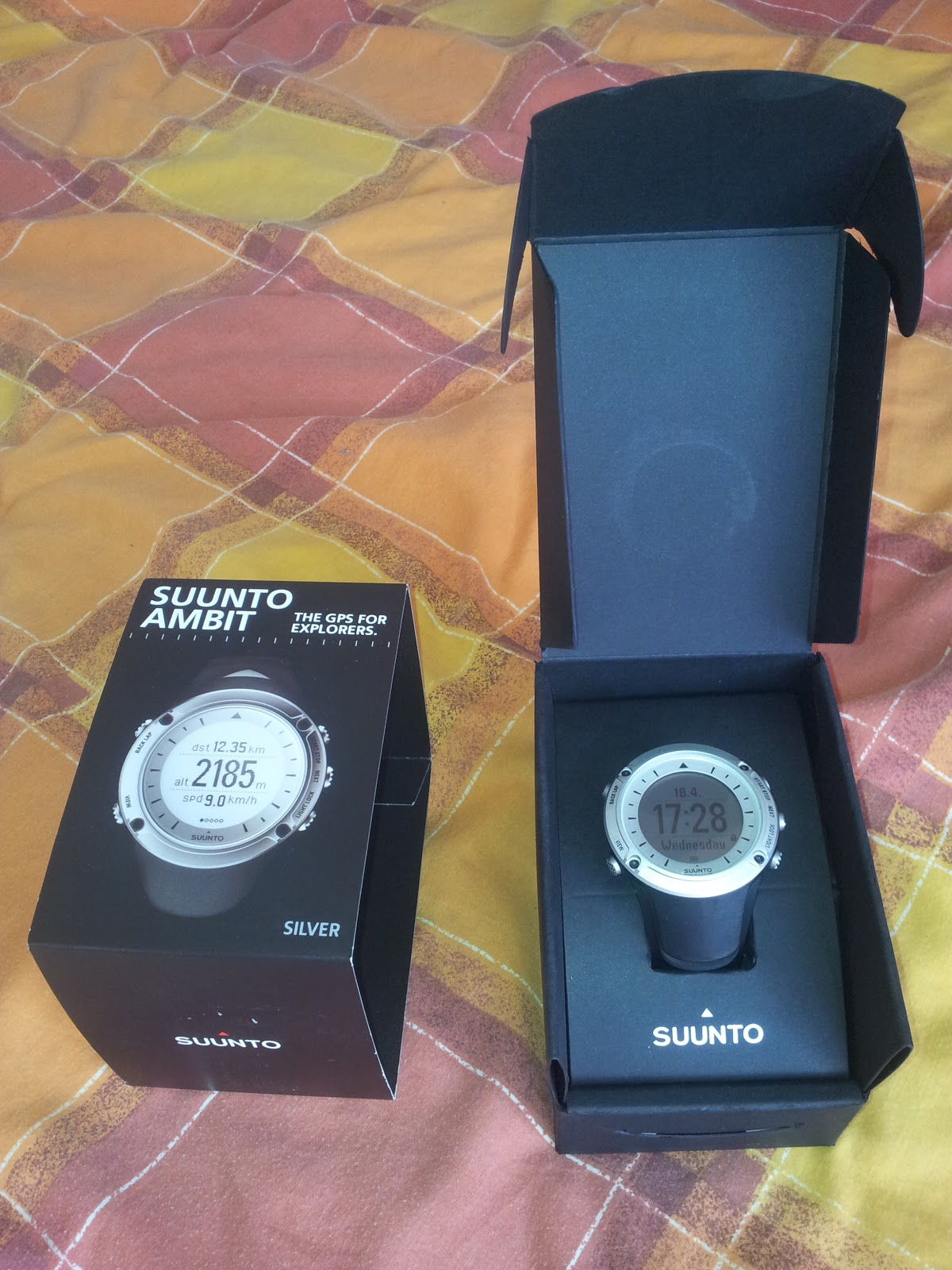 travelled. I looked at Garmin units and still stuck with a new Polar. This time with a foot pod which was very good but big. I then upgraded to the Polar RSX800CX which was smaller and better and came with an external GPS unit. I used this a few times but just wasn’t happy with it so always just used the pod which did a great job. It still amazes me just how accurate accelerometers can be! I loved this watch as I could keep it on all the time as the battery lasted a couple of years and it’s not massive so doesn’t look like you have a bin lid on your arm.

This was all fine and dandy up until last year when I hit the South West Coast path to run my first Trailblaze. I was fortunate to be offered the support of the Endurancelife team for the duration of the run. I was asked if I could log it, but I couldn’t as I didn’t have a GPS unit, so Andrew kindly lent me his Garmin 310xt so that I could get the stats for them for the 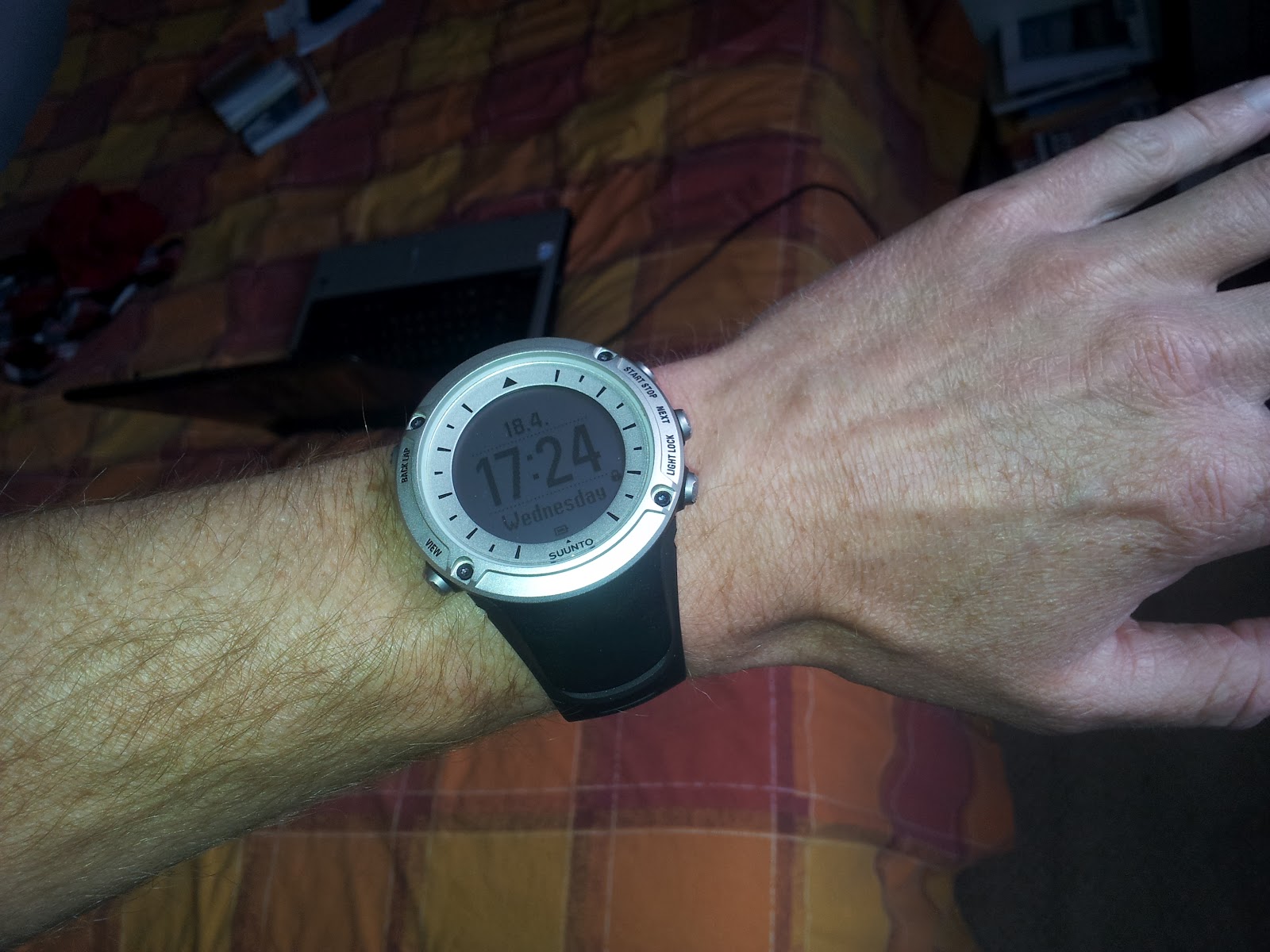 whole route. Well, that was that! I loved it and as soon as I got home was researching which I should get. The best out there for my purpose was the Garmin 310xt, even though it’s claimed battery life was only 17 hours. This was the main reason why I hadn’t got one before, but I had been lured in after using it. It was great fun. I loved seeing the map after with the route profile and my pacing throughout. I have stopped using any HRM now as I run for fun, and by feel. I then begun the hunt for the best price, eventually picking one up for £180. I have since used it and really liked it. It has served me well and is still in great condition after a fair few big days. My negatives though are as previously mentioned, the low battery life (which I have countered by awkwardly running along carrying a power monkey and charging it on the go to record the whole of the bigger of my runs), the fact that it can not be worn as a day to day watch, and that it looks like a great big toy on your wrist. It is also apparently pretty fragile though I haven’t had any issues with this myself. Hey ho, no piece of kit is perfect, especially the more complex things. 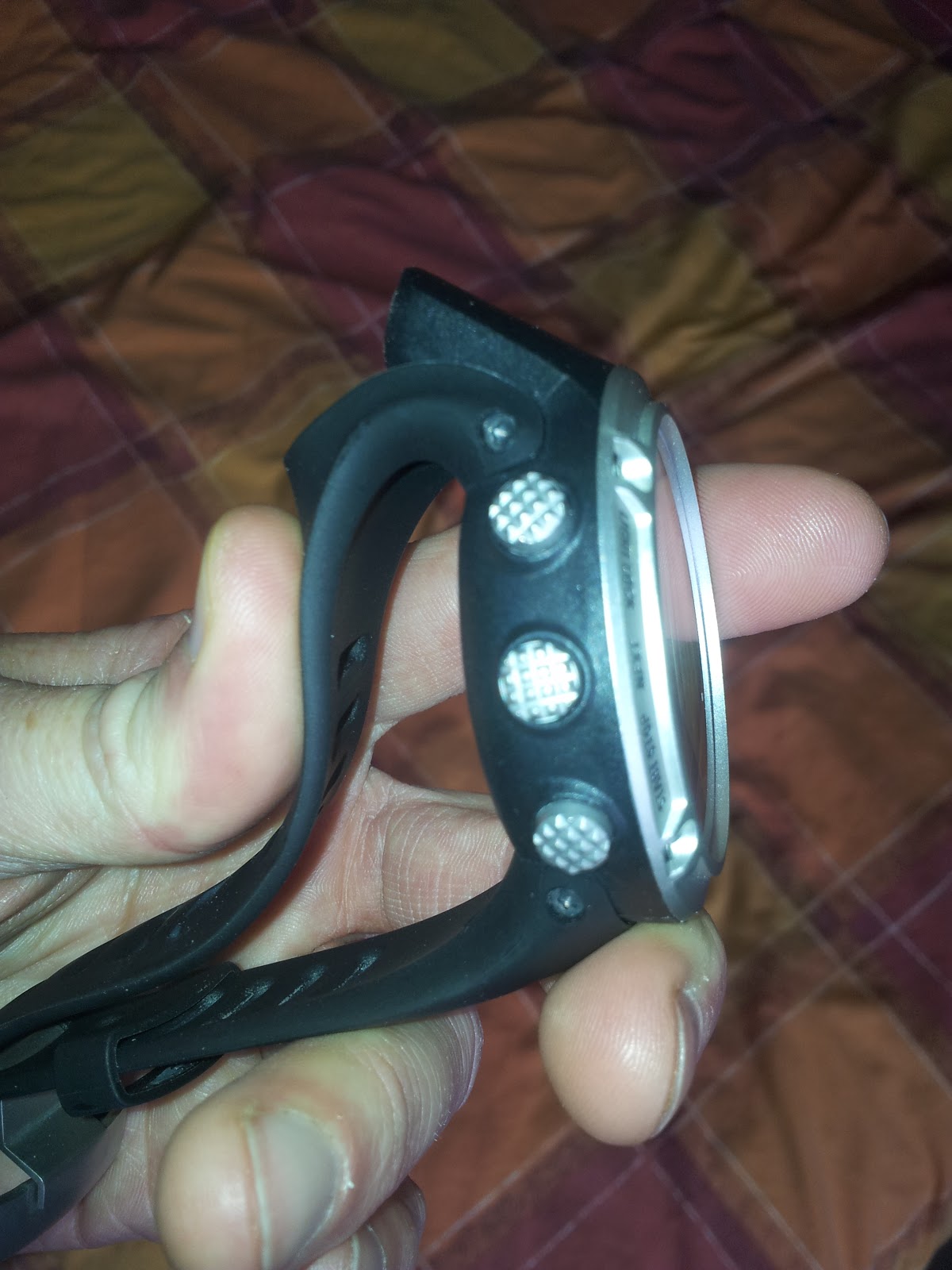 Roll on a few months and I hear mutterings of a new GPS unit designed for the mountains that has a battery life of 50hrs! I must find out more! Could it therefore be worn as an everyday watch? It is produced by Suunto, and as far as I’m aware their units are far more aesthetically pleasing.

Slowly Suunto drip feed information out about their new product. It’s name is Ambit. It can indeed record for 50hrs though it manages this by recording it’s GPS location every 60 seconds (as oppose to 1 second for sub 17 hr runs). It is waterproof to 100 metres. It has a Altimeter, Barometer, thermometer and a magnetic compass! Awesome!

So as time moved on, and more pictures and info are released, I couldn’t help but think that unless they were missing out some key weakness, this is the only wrist worn GPS that will cover pretty much every race and run I do. 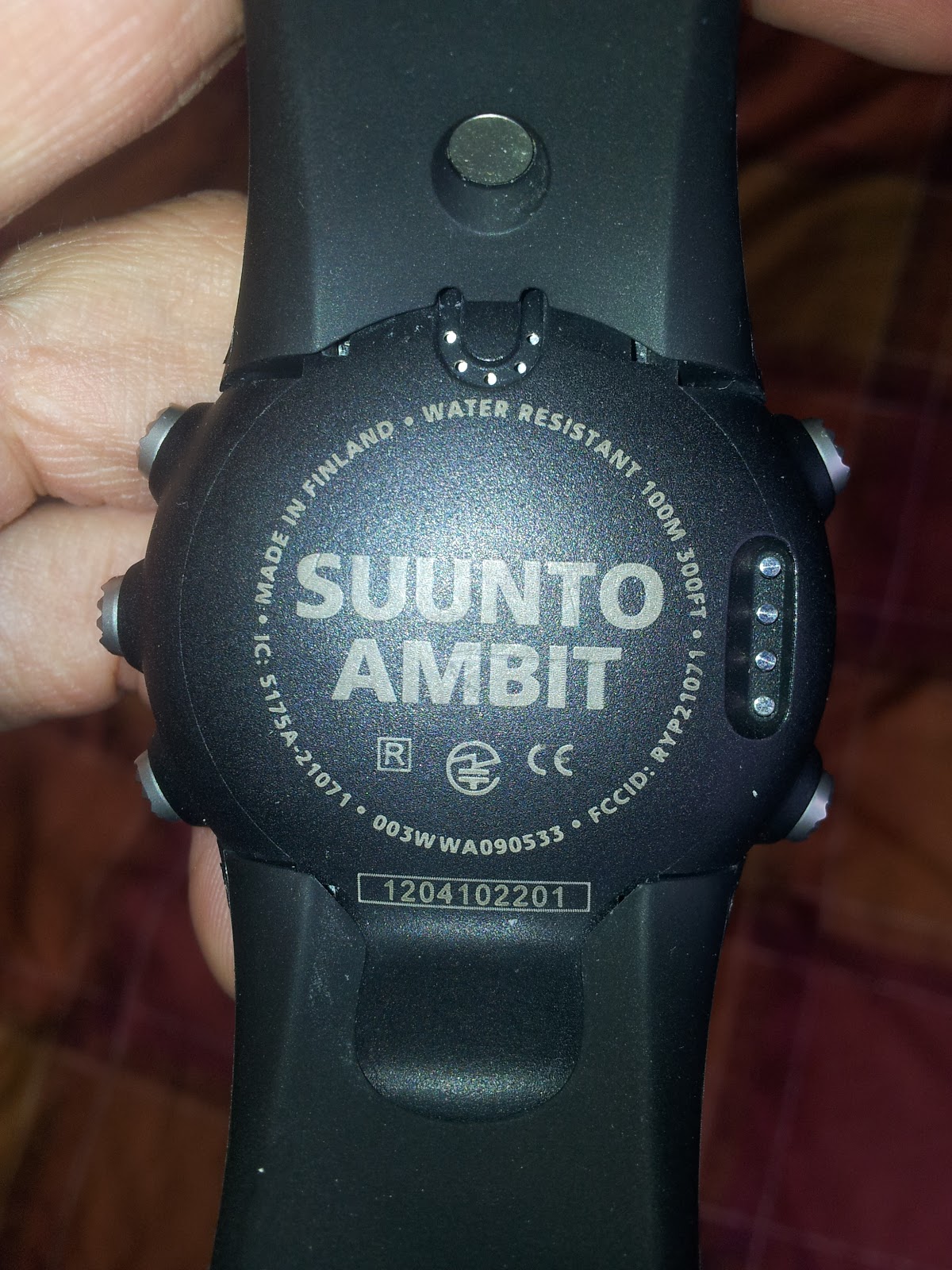 My only real concern was the size. I don’t have the biggest of wrists and seeing as I wanted a watch that I could wear for everyday use, this was a possible sticking point. The Garmin 310XT makes no effort to be a watch. It is designed to be worn for training and racing only. I have never seen anyone wearing one casually (not even sure they can be used as a watch). I contacted a shop that was going to stock them to confirm that I could return it if was too big for my wrist. No problem.

I kept almost hoping that a reason would materialise for me not to get the Ambit, but no. For me, it was all down to looks. How shallow am I!

The day I first see it in stock in a shop online, I order it. Two days later it arrives, and excitedly I open it up. It looks great. I carefully tease it out of the packaging and place it on my wrist. In a nano-second I have given it a new home. The shop will keep my money. It is big, in fact it will be too big for some peoples wrists and/or tastes, but I think it does a fairly convincing job of pretending to be a chunky watch. I have had it for over two weeks and it has only left my wrist to be connected to my laptop for data transfer/charging. 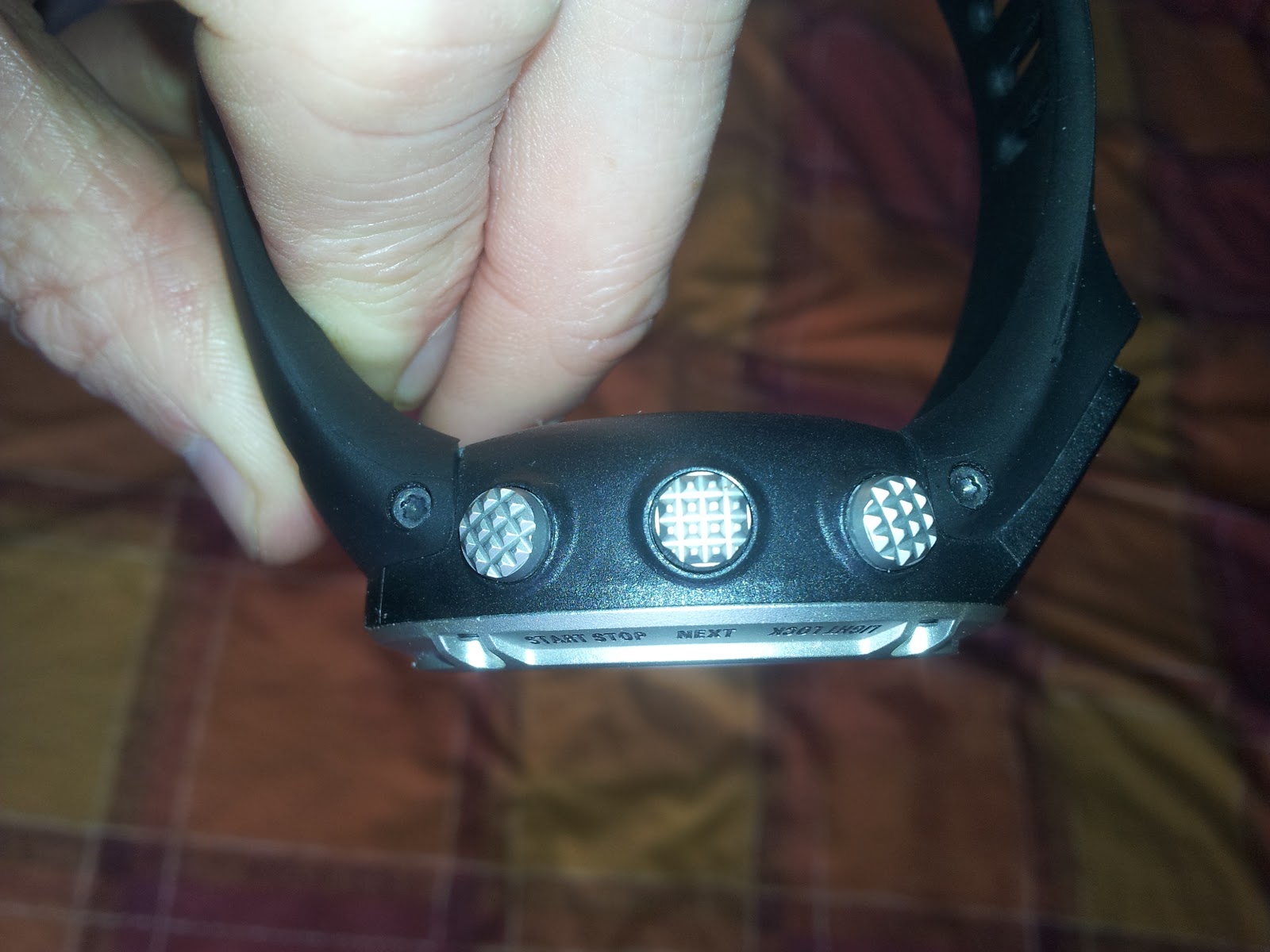 Once I had it charged I pressed the buttons lots without any guiding from the manual and pretty much worked out the majority of the functions. Amazing! I know I should read the boring manuals, but I’m a child. I can’t help myself. One advantage about this cowboy technique is that I see how truly intuitive the Ambit is. It was simple and easy to set up. I was ready to run in no time and record it.

What about Movescount then? Movescount is the Suunto website that you download your workouts, or Moves as Suunto dub them. You can also adjust setting for the Ambit on Movescount then upload them to the unit, which is a lot less fiddlier than doing it on the unit. Once I had messed about with my settings, I had a look around the site and learnt that the main difference (to my non-technical eye) is the fact that it is much more a social media site than Garmin connect. You can join groups of like-minded athletes and follow each others progress and look at their individual moves. You can comment and there are leaders boards for each group. You can hunt down athletes you admire (who use a Suunto device of course!) and follow them. When I read about this before being a Suuntoite, I was non-plussed, but now I’m using the thing, I reckon it’s pretty cool. I don’t care who you are, if you do a run you’re proud of, it’s nice to get praise for it. It’s great for motivation. 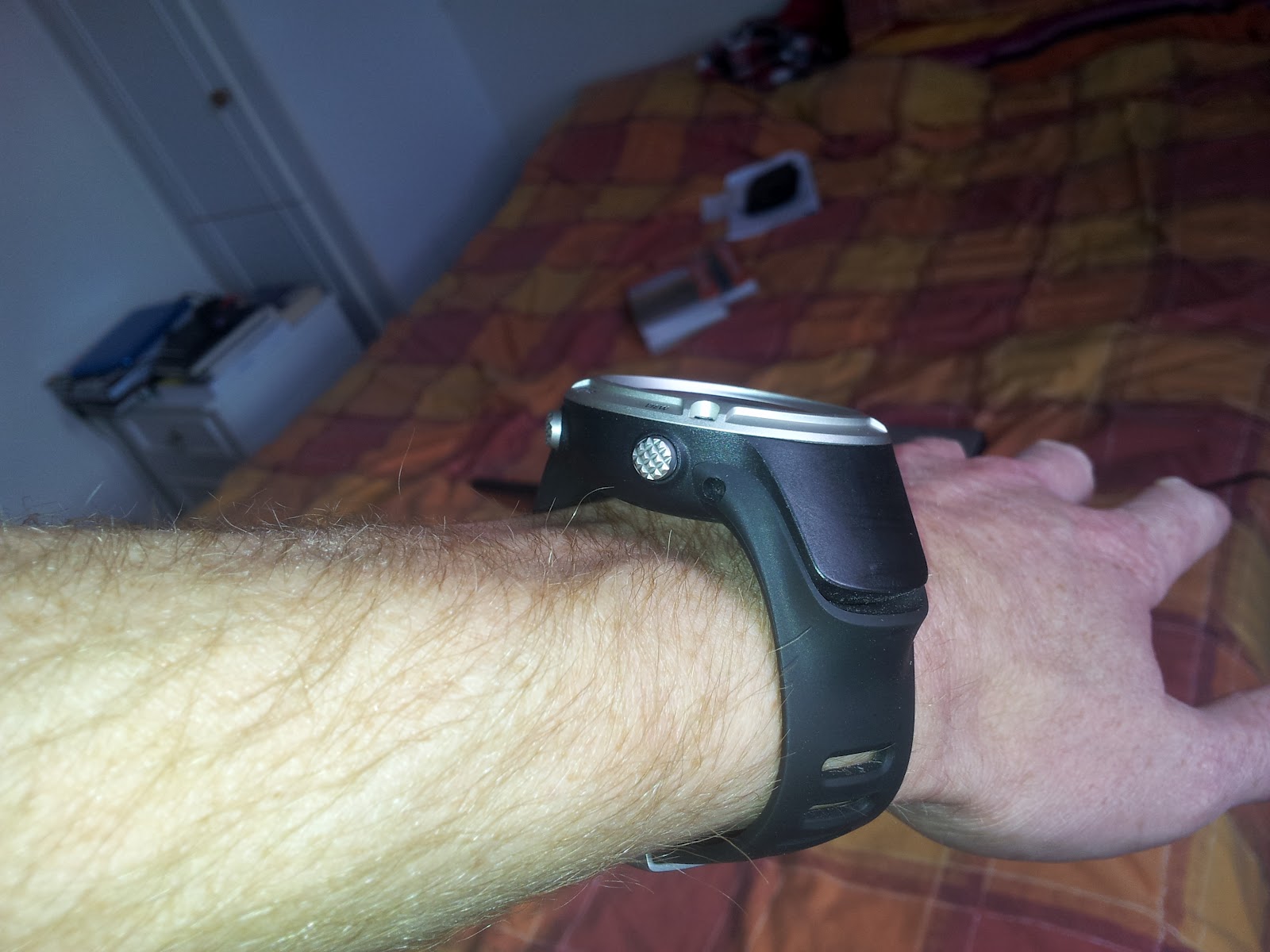 I will take a minute here to tell you all that this is not an in depth review of every single function that the Ambit has or a true comparison against other units. If you want that then go to DCRainmaker’s amazingly analytical, in-depthreview. I don’t have the time or effort to review such a complex piece of kit in such a fashion. I also don’t use a lot of the functions of the Ambit as I know a lot of people will. A waste I hear some of you cry. Well, I needed that 50hr battery. I won’t use the HRM as described before. I will use it for the GPS function, the compass, Altimeter. Not as a fitness tool. This is just my rambling thoughts on an incredible piece of kit. I hope it will help you with whatever choice you make.

I have done a few 1hour runs and it was great. I then ran 3 hours and it was fine. Then I ran over 8 hours and again I was happy. A week later I was entered into the Viking Way ultra which is a 147 mile single stage race with a cut-off of 40 hours. A proper test! I set it up for 60 second reading to last the distance. It lasted absolutely fine. It took me 29:22 so theoretically it should have another 20 hours worth of juice in it. I have to say that there aren’t too many races I’ll be doing that will be testing that claim!

I got what I wanted with this product. I got a GPS unit that you can strap on and forget. You won’t have to worry about the battery dying on you and you also don’t have to worry about giving it a good knock. I did give it a good swing at a wall and there isn’t a mark. The GPS itself is pretty quick at acquiring satellites. I can and do wear it as my everyday watch so I don’t have to keep changing watches which is exactly as it should be. The compass is really good. I also like the fact that it has an accelerometer in it which could be utilised more in the future with firmware upgrades. Is there anything I don’t really like about it? I don’t think so. Remember that I have simple demands from it unlike what some of you will be after.

So, in summary, if you have the same basic needs as me from a GPS unit, then I can wholeheartedly recommend the Suunto Ambit. It’s the most expensive piece of running kit, I could survive without, but I don’t regret for one second paying the rather high £350 price tag for it.